Wise words from Professor Sarah Gilbert, developer of the Oxford/Astra­Zeneca Vaccine, echoing the sound advice of Marie Curie, long ago:

“Don’t dismiss science, because science does so much for us. If you feel uneasy about science, go and understand the science. Go and find out what’s going on.”

The long awaited the White Paper, finally published on 14 December, is clearly designed to please all shades of opinion as far as possible. Creating jobs, rebalancing the north-south divide, and aiming for net zero, it sets the UK scene for the COP26 UN meeting in Glasgow in November 2021. As such it includes some well intentioned hopes for carbon capture and storage, some scientifically inept plans for renewables, along with encouraging news for UK nuclear of all flavours.

An expansion of off-shore wind to a capacity of 40 GW by 2030 was foreshadowed in an announcement by the Prime Minister a few days before. This may please Green Idealists, the businesses eager for early construction contracts and the oil and gas industries who will benefit from the scheme’s failure. However, anyone who cares to put in the numbers will not be impressed.

In the previous Newsletter we saw how there was nearly a loss of supply at the beginning of November because the wind failed for several days. Without gas or nuclear there would have been a prolonged breakdown in all areas.

At the beginning of December the same thing happened again. Colin Megson explained to readers on social media:

This 5% of homes is in sharp contrast to the ridiculous statement by the Prime Minister that off shore wind will be “powering all homes with offshore wind by 2030”. This policy will lead inevitably to frequent breaks in supply for most homes, unless of course the UK still has full fossil gas-fired generation in 2030. Obviously nuclear generation with neither gas nor renewables would be best for the environment as soon as we can build it on the scale needed.

But having nuclear “standing by” at the behest of wayward renewables is like following a familiar horse and cart with a modern car. Why, given the car, should anyone run a horse and cart, except for pleasure if you like? Off shore wind is no pleasure, it’s just a bad investment. But then so are grid-scale batteries, biofuels, carbon-capture-and-storage and solar. 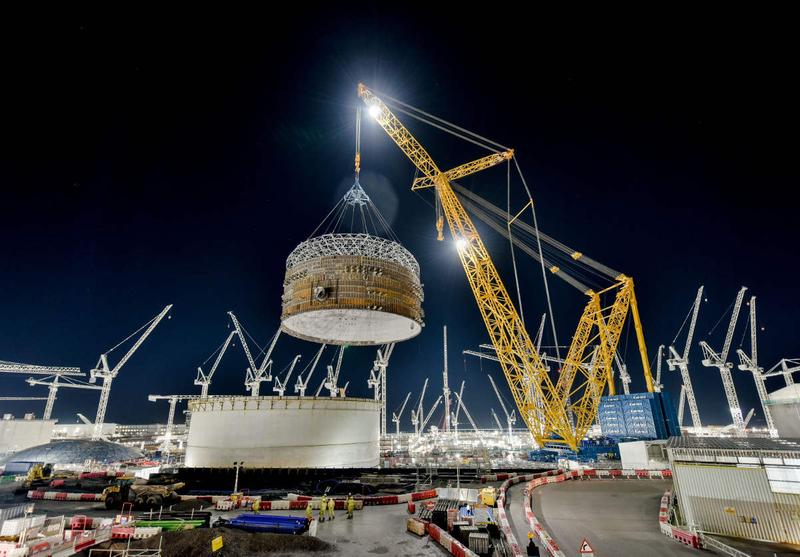 Here is a video and an article showing recent progress:

EDF are very keen to show progress on the site, especially given the hard time that they are getting from the unions at home in France. And then they are intent on securing the contract to build the twin at Sizewell.

Having the experience of building HPC, it is that much easier to build SZC. And it should be that much cheaper too. That is why the Government expects the price to be substantially more beneficial. It has now agreed to start discussions with EDF on the basis of the new RAB model. This is now the preferred way to finance infrastructure with a long lead time. The World Nuclear Association describes the construction of nuclear plants as a “no brainer”. However, experience has a different story to tell. Society has not been keen to invest in nuclear power.

Financial markets are largely concerned with short or medium term investments. They have trouble coping with the 40-year timescale of student education, for instance. The large up-front cost of a big nuclear plant with a 60-to 80-year payback time scale is not seen as attractive either. Another consideration is that few of those who should make such investment decisions have any personal confidence in the science.

A new book by Edward Kee has just become available. He has studied the problem of how the short term market fails to accommodate the long term need in the nuclear case. He calls this a market failure, but I think the malaise runs much deeper. People’s confidence fails when they try to make decisions outside their comfort zone – a zone defined by the scope of their own education.

Anyway, we should all try to enlarge our comfort zone by reading Edward Kee’s book, and then, perhaps, reflecting whether separating ourselves into professions helps to establish confidence over the broad range of questions involved in building nuclear power stations.

The UK Cabinet Office held a briefing by Zoom on 3 December, about how relevant organisations can bid to be represented in some way, perhaps jointly with others, at COP26 to be held in Glasgow 1-12 November 2021. Bids are invited for exhibit space and for use of small and larger lecture theatres, free of charge to successful bidders. Bids must be submitted by end of January, and successful bidders will be notified by end of February.

At the SONE committee meeting on 10 December it was agreed that we should pursue this. Time is short, bids need to in by end of January, so we have started the process of trying to put together a collaboration. If any SONE member feels they can help, either in constructing our bid, or perhaps by being present in person at some or all of COP26, please get in touch with Ian McFarlane, via his email treasurer@sone.org.uk. Some details of the event can be found at https://ukcop26.org

An important task is to correct mistaken ideas when these appear on the internet. One of these is a description of Global Warming that is quite wrong, unfortunately. I emphasise “unfortunately” because it sounds very scientific and authoritative being the abstract of a published paper. So much for peer review!

Over longer time-scales there is no net heat inflow to Earth since incoming solar energy is re-emitted at exactly the same rate. To maintain Earth ’s thermal equilibrium, however, there must be a net outflow equal to the geothermal heat flow. Performed calculations show that the net heat outflow in 1880 was equal to the geothermal heat flow, which is the only natural net heat source on Earth. Since then, heat dissipation from the global use of nonrenewable energy sources has resulted in additional net heating. In, e.g. Sweden, which is a sparsely populated country, this net heating is about three times greater than the geothermal heat flow. Such thermal pollution contributes to global warming until the global temperature has reached a level where this heat is also emitted to space. Heat dissipation from the global use of fossil fuels and nuclear power is the main source of thermal pollution. Here, it was found that one third of current thermal pollution is emitted to space and that a further global temperature increase of 1.8 °C is required until Earth is again in thermal equilibrium.

The true explanation of the mechanism of global warming is quite different from the one described and its consequence far larger, unpredictable and more dangerous.

As a result it is not possible to say that the Earth is destined to undergo a small change before a new equilibrium is reached. Already the melting ice is being replaced and is passing a “tipping point”, as the popular press likes to say. The quoted article is wrong and dangerously optimistic. The present situation is discussed here.