On 8 January at the suggestion of SONE member, Malcolm Savidge, the Cirencester Science and Technology Society hosted a lecture on “Nature, Nuclear Energy and Life” in the fine surroundings of the Royal Agricultural University at Cirencester. The weather was foul, the hospitality excellent, the hall was full and the Question and Answer session at the end of the lecture was stimulating. Discussing nuclear energy is never dull!

On 29 January Downe House School, near Newbury, provided an audience of 140 GCSE and A-level students, all girls but from many parts of the world. The title was “The Next Energy Revolution”. We started with a squirrel in need of more nuts, and moved on to explaining how changes of energy source have triggered transformations in human civilisation in the past, and are about to do so again. To prepare for life in this situation the work of Marie Curie and the broad spectrum of physical and medical science that she pursued were held up as examples for all young people to follow, including nuclear energy as a goal. There were plenty of questions at the end – with no shortage of answers.

On 25 January there was an open “Stargazing” event hosted by the Oxford Physics Department. SONE Member, Marie Zabell, helped with a stall where we exhibited the IAEA poster and another on public health. The event as a whole attracted over 1200 visitors and we had some significant discussions with a good number of professional people and their children. On a monitor we ran the real-time worldwide electricity consumption site  – any Member who has not visited this site would be well advised to do so. It shows the benefit of nuclear generation in France, Sweden, Ottawa, in graphic detail and refreshed every ten minutes or so. (This link and other similar ones are posted on the SONE site)

Not to be outdone by the stellar displays on neighbouring stalls we were handing out a flyer that depicts the Crab Nebula where Uranium and Thorium were formed in the supernova explosion observed by Korean astronomers in broad daylight in the year 1054. The flyer offers a lecture on
“The Natural Science of Reliable Energy, making the right choice to sustain our civilisation”.

More takers, please!
Thanks to Marie for taking the photograph below. 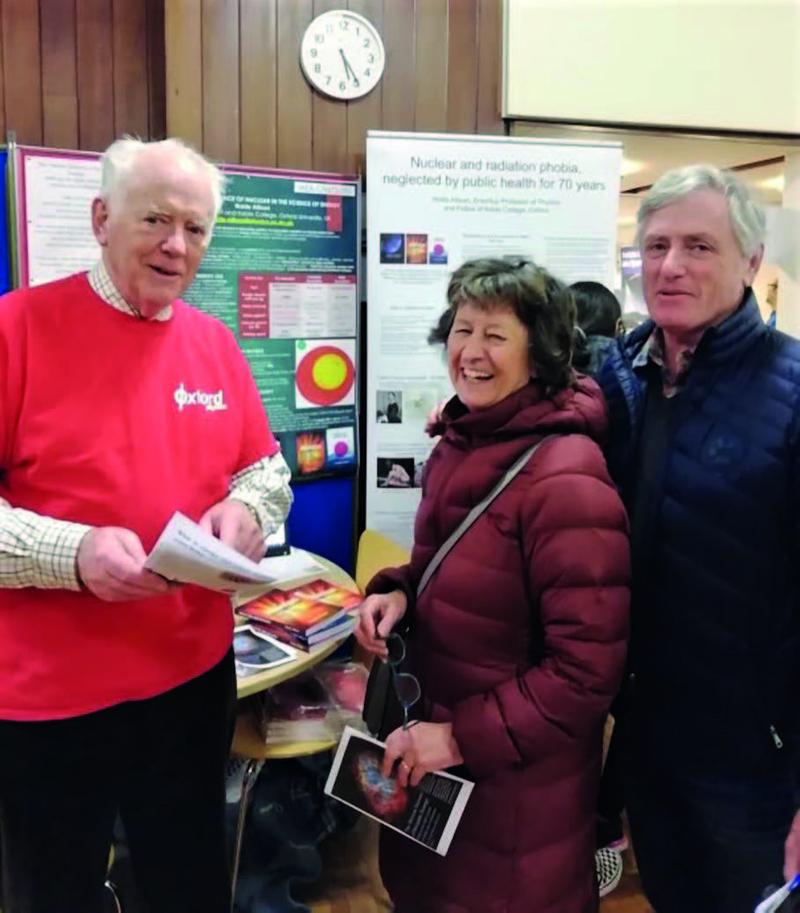 An Editorial: The Cost of Nuclear

I have always marvelled at the Pyramids of ancient Egypt. Thinking about the society that constructed them exposes the weakness of simple popular ideas of “cost”. What do you need to build such a pyramid? Just two things, I suggest: firstly, the will, including a readiness on balance by all those involved to forgo other benefits of effort that might be had instead; and secondly, the knowhow to organise and carry out the construction. The goodwill of past exchanges may have been surrendered, or future goods mortgaged. Maybe the readiness of individuals was obtained by extreme authoritarian coercion, but the effect is the same. It is the answer to the simple question: All things considered do you, as a society, want to build a pyramid? The need for knowhow is similar. Are those who are able to do the work willing to do so? There the number of those who can do it is critical.

Today, the answer to the first question is blown hither and thither by opinion that lacks evidence linked to understanding, that appreciates where else the energy required might come from. Broad public education and confidence are needed. The second question is also a call for education. We need far more young people to study the science and engineering required. Let us applaud them, for they are the ones who are making the real long-term investment, not the market traders. Education is slow and takes time, both for the public opinion at large and for the professional engineers and technicians. The media’s preference for excitement and entertainment rather than understanding is a danger to civilisation, worldwide.

But if education is critical to fulfil both needs, is it fit for purpose as currently provided? Many today are apprehensive of modern technology and the way it is developing. Whatever their age they should set to work, instead of sitting and hoping that the future will be like the past. I suggest that concerns about 5-G and Artificial Intelligence should be countered by explicitly putting the education of minds before that of silicon. This is not currently the case. The ‘apps’ in each computer or mobile phone are updated every few months. Yet the minds of youth are channelled by today’s education into a narrow range of disciplines at the age of 16-18 and expected to work constructively to the age of 80, even 100. It is no wonder that this short narrow preparation for life fails to provide the personal confidence needed over many years. As individuals many of us enjoy an extended life span, and we should use it.

We should grab the chance to re-design the educational experience. That will take vast resources, yes, but it depends what you want. In the Age of Enlightenment in the 18th Century the rationality of science was put centre stage in political and cultural thinking. We need a New Age of Enlightenment, not a Green New Deal. This country should play a leading role in such a New Age, with nuclear power and a complete reform of life-long education, both broad and deep.

For those who prefer news that can be enjoyed in a more traditional fashion, glass in hand, I commend this message contributed by a Member this month:

“Believe it or not, this is the trade name for a new brand of gin. To prove that in many areas around Chernobyl there is no danger today from radiation, scientists at the University of Portsmouth worked with Ukrainian colleagues to create a completely new spirit distilled from Chernobyl grain. Proven to be safe to drink by radiochemical techniques, ATOMIK Vodka has a distinctive taste; it is distilled in the traditional local manner so that the flavours of the grain are emphasised. Cheers!”