Recently by the same author:

The European Union is making significant progress on its acceptance of nuclear power. Last month its JRC Committee published its Technical assessment of nuclear energy with respect to the ‘do no significant harm’ criterion.1 Then on 21 April came news that investment in nuclear power should be accepted in Europe as “taxonomy compliant”.2

Trade unions in the EU have added their weight to this scientific opinion. World Nuclear reports that thirteen trade unions representing energy and nuclear workers in Belgium, Bulgaria, Finland, France, Hungary and Romania have told Ursula von der Leyen, president of the European Commission, in a joint letter that nuclear energy should be part of the European taxonomy in order to meet the objective of the Green Deal.3 They note nuclear power currently provides almost half of the low-carbon electricity production in the European Union.

Meanwhile the German Environment Minister “doesn’t consider nuclear energy an option for low-carbon power production”.4 By shutting down its remaining nuclear plants and undertaking to close its coal fire plants, Germany needs more energy. With its political influence in Brussels and pipelines to Russian gas, it is pressing for gas plants to be given a green “investable” label of the kind it would deny to nuclear energy!5 So Germany’s anti-scientific ecological death wish continues.

However, there are legal challenges even within Germany. On April 29 the Financial Times reported “Germany’s top court has demanded changes to Germany’s climate law, saying it places too much of a burden on future generations to reduce carbon emissions, in a key victory for young climate campaigners”. So the interests of the younger generation in Germany may be upheld.

Losses and hopes in the United States 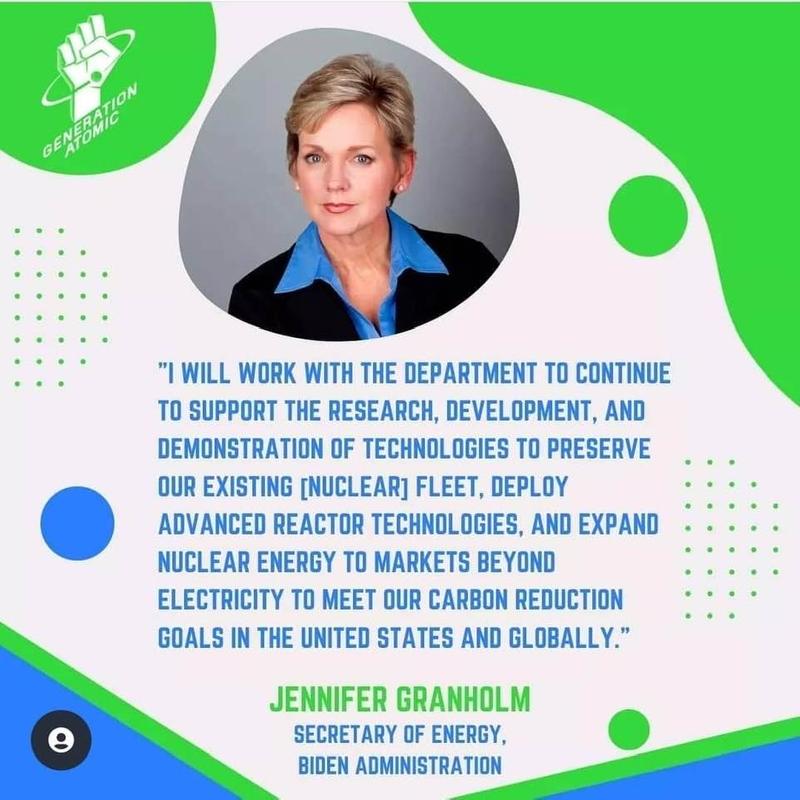 A tragedy, another good nuclear plant closed on April 30. With the loss of Indian Point New York has lost 1 GW that is to be replaced by a natural gas plant.

However, the Biden Administration brings the hope of a more scientifically sensible future with the appointment of Jennifer Granholm as Energy Secretary.

Hualong One and Two

Meanwhile China is not weighed down by the ideological inhibitions that obstruct Germany’s future, nor by the surrender to short term market forces that destroys reliable energy plant in the United States. China’s development of conventional nuclear reactors has continued, reducing both costs and construction times. The entry into service of their own Hualong One reactor at the end of a 62 month construction time has established their leadership.6 China has six Hualong One reactors under construction abroad and has now announced that the first Hualong Two reactor will be built starting in 2024. This will have a simpler design, lower cost, but the same safety standards. It will be completed in four years. 7

Energy and Life with NetZero: Lessons from Covid-19

Like Climate Change the coronavirus has threatened all nations. We have learnt how global answers need to be applied everywhere for everybody. While the scientific development of several vaccines has been fast and effective, we have seen how that is just the first step. The mass production of vaccine and its availability in all countries have met barriers of local jurisdiction, intellectual property and price that have obstructed the common interest. So too has the right of anti-vaxxers to opt out. In the resolution of global problems, rights and intellectual property get suspended in the common interest.

The effect of Climate Change will persist for centuries. The best that science can offer is mitigation, the opportunity to ensure conditions become no worse than they might. The revaluation that Climate Change brings will be significant and long lasting.

Net Zero means new sources of energy, not just in some countries, but in all. Natural science is unambiguous – the physics of energy offers only three types available in quantity on Earth: those refreshed intermittently by daily sunshine; those fossilised and laid down over geological time; and nuclear energy whose origin predates the formation of the Solar System. Their energy concentrations are vastly different, in the ratios of one, to a thousand, to a billion.

Mankind gave up the weakest, the unreliable weather-related renewables, in favour of fossil fuels at the time of the Industrial Revolution. As a result, life expectancy doubled, the population quadrupled, and the human race prospered, adopting many previously unattainable human rights in the process.

If the use of carbon fuels is now to end, 250 years of progress is at risk. A reversion to renewables is a backward step. Their unreliability has not improved. Today their huge “farms” and reservoirs invade the natural environment, while being at the mercy of a shifting climate and extreme weather events, as illustrated recently in Texas and California. Nevertheless, vested interests in fossil fuels use their declining influence to speak in support of renewables. Standing ready for the failure of wind and solar is now their only chance to monetise their buried reserves – reserves that would be better left buried and their value written off. Such revaluation hurts.

Since 1945 nuclear technology has acquired a fearsome reputation that lacks hard evidence. The death toll at Hiroshima and Nagasaki, though terrible, was similar to that at Tokyo from conventional bombing. In both cases blast and fire killed many people, but radiation added less than 1% to the death toll. Yet during the Cold War, fear of radiation was an important weapon, and oil interests were content to accept the demonisation of nuclear energy that threatened them, even then. Meanwhile, following the work of Marie Curie high levels of radiation have been used to cure cancer in clinics worldwide for over a century, and people are pleased to welcome that.

Nonetheless, an aversion to civil nuclear was institutionalised, and protection against radiation was supposedly assured by draconian regulations approved by the UN. As a result, the deployment of nuclear power has been weighed down with caution and overdesign that have made such plants unreasonably expensive and slow to construct. In fact, the record of the past fifty year shows nuclear to be the safest of any source of power. At Fukushima the death toll was zero and at Chernobyl less than fifty, though the media, always searching for a source of putative excitement, have scripted otherwise – as with murder mysteries and other thrillers.

Although the anti-nukes, the “antivaxxers” of nuclear, established their creed long ago, in recent years some studied the science and admitted to changing their minds, as they explained in a full-length video, Pandora’s Promise. However, others lack the intellectual courage to reconsider and see their mistake.

It may seem strange that a source of energy as powerful as nuclear with its radiation should be so safe. But science explains why this is so. Physics ensures that nuclei “self-distance” – so thoroughly that not one in a million has changed since the Earth was formed. Also, when life began, radiation in the environment from rocks and space was more intense than today, so that biology had to evolve protection against it to survive. Our existence here today is evidence of its success.

If the basis of the “vaccine” for Net Zero is nuclear, which reactor design is the right choice? Existing older plants can still contribute, but the new versatile modular reactors are smaller and cheaper because they can be factory built. There are many realistic contenders that also offer district heating, hydrogen production, desalination and vertical farming. In the next ten years we will have a good idea which will best serve a midsized community. But then there is the roll out.

The production of one to two reactors every week for thirty years is the gift the human race needs. But the world’s values have become too unequally spread for many to pay their share. The stress of fulfilling the common interest will be immense, locally and internationally. The Industrial Revolution brought tough new value alignments, and so will this – but there is no viable alternative and it will be painful.

A world initiative in technical training is needed if nuclear power is to be assimilated. To make inroads on public opinion, better science education in schools should reassure the next generation. That will take thirty years, too. Though many may question the need for this programme now, an era of frequent blackouts and extreme weather events may expose the true worth of this altruistic solution. And the cost? Less, and of greater value, than any suppose today.

Life is busy and reading books is time consuming – all the more useful then to recommend those with an important and well told message. This book describes how the machinations of the electricity grid act in favour of unreliable sources and against the interests of the environment, the consumer and nuclear power. The lack of responsibility for the stability of the utility remains hidden until the weather exposes the rotten core, as happened in California and most recently in Texas. While the book is based on the situation in New England, similar forces are at work everywhere. A utility, universal and reliable, is not well provided by a patchwork of interests with other objectives. Money? Price? These are mechanisms to distribute effort and value. Markets work poorly when distributing common goods that all need – clean air, water, electricity and now broadband. This book is not fun to read, but I needed to appreciate what it has to say. I am glad I read it.