We were all extremely saddened to learn of the passing on the 4th March of our Chairman, Sir William McAlpine. Neville Chamberlain has written a short obituary of him, that you can read on the last page of this newsletter.

There is also an invitation to attend Sir William’s farewell memorial service, and members should communicate directly with the Sir William’s office if they wish to attend. The contact details are included.

Economies of scale have pushed up the optimum size of commercial nuclear reactors ever larger.

Each of the Calder Hall reactors, brought on line in 1956, was a mere 50MW in output. Today we see new reactors at 1600MW. Thus, the overheads of each unit, the common features such as control rooms and their now highly sophisticated equipment, have their costs spread over ever greater capacity.

Unfortunately, the downside of this is ever more complicated systems, more challenging financial arrangements and greater project management issues. The timescale for completion of a single station, which often proves to be unique by the time it is finalised, has stretched to decades! The massive infrastructure works, the enormous potential for disruption and the consequences following any incident, have resulted in the need to site nuclear power stations remotely from population centres.

There is a growing realisation that much smaller nuclear stations will help overcome these downsides. The economies of scale can still be achieved by designing the reactors for manufacture in a factory and shipping the prepared modules for rapid installation at a large number of power station sites. These much smaller reactors, or Small Modular Reactors (SMR’s), can be much simpler than their much larger cousins, easier to construct, with shorter construction schedules, individually less costly and easier to finance and less complicated to control. As standardised units, they will each be less demanding in terms of regulation and approval. Moreover, posing less of a threat [however remote] to their neighbouring population, they could be sited in the midst of larger conurbations; this can lead to the use of waste heat from the power station being used for industrial or district heating so increasing the efficiency of energy utilisation and, of course, reducing the stress on the national grid.

There are many designs of such SMR’s, most harking back to development work in the 1950’s and 1960’s before the nuclear world seemed to settle on Light Water Reactors. Thus, a huge amount of development is already on the record. What is needed is a new approach to the economics of these machines, that is factory production of modules, and the application of current regulation.

The table that follows reviews some, but not all, of the current contenders. 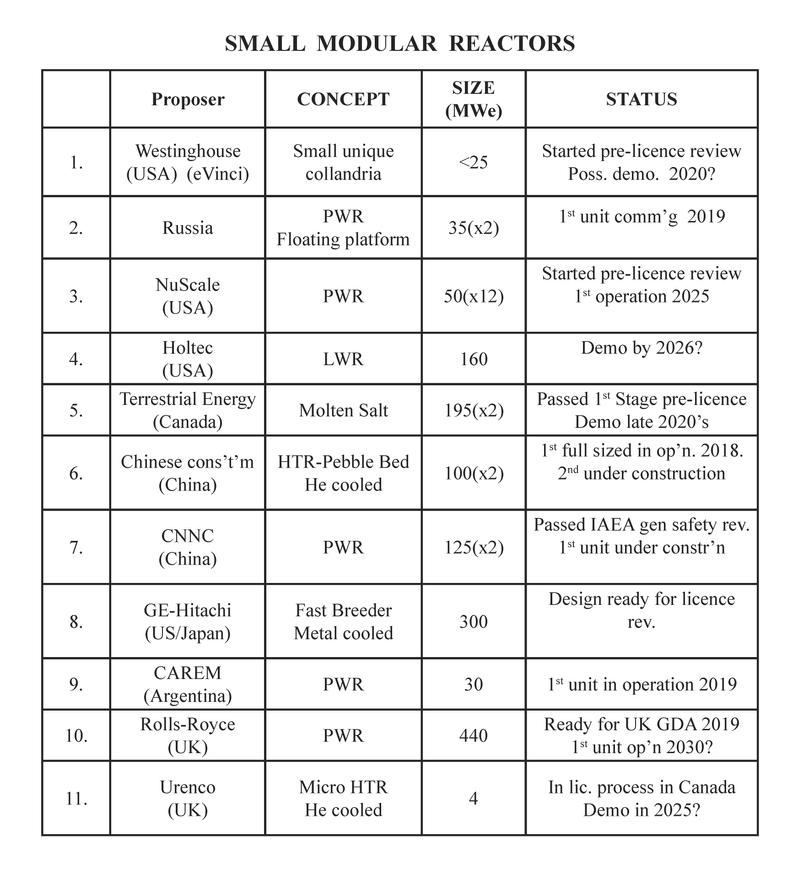 The SONE Committee are pleased to report that Kristin Zaitz and Heather Matteson have been elected Honorary Members of SONE. They are the joint founders of Mothers For Nuclear, an enthusiastic group of younger people who have attracted considerable attention in the USA demonstrating to keep existing nuclear power plants open. They are longterm employees at Diablo Canyon nuclear power station in California.

Their problem may differ from ours but we share their enthusiasm.

Bill, as he was known to his many friends, was famous for his leadership of the iconic McAlpine construction company and for his enthusiasm for steam railways. But to SONE, he will always be remembered, first and foremost, for his chairmanship of our organisation for some eighteen years. He was always involved from SONE’s inception and when our first chairman, Sir Christopher Harding, died suddenly in 1996, Bill, unflinchingly, accepted an invitation to take the chair. He has lead SONE with great distinction since, never hesitating to put his name behind our arguments and submissions. Bill was a generous host and always fun to be with. We shall miss him enormously and SONE has lost a great friend. Our thoughts and best wishes are with his widow, Judy, who is also a patron of SONE, and to his family.

Members of SONE are invited by Lady McAlpine to join the family for a farewell Memorial Service for Sir William at the Museum, Fawley Hill, RG9 6JA, at 2pm on Sunday 13th May. Those wishing to attend please contact office@sirwmcalpine.com or 01491 571373

Many SONE members will be saddened to learn that David Evans died on January 11th.

David was an enthusiastic member of SONE and will be remembered for his immense contribution to British nuclear technology. He had a major role in the commissioning and early operation of the Calder Hall magnox reactors and, later, the Windscale AGR. He then moved to Dounreay to work on the Prototype Fast Breeder Reactor, work that brought him into a range of international collaborations. In 1986, he was poached from Dounreay to head up the newly- formed Reactor Division in BNFL, where he secured a ten year extension to the lives of his beloved Calder Hall and Chapelcross reactors. David was such a professional, sincere man and a pleasure to work with. We need many more like him if we are to succeed in rebuilding our nuclear industry.

Our thoughts and best wishes are with his widow, Pat, and family.