Admittedly dwelling on emotion rather than evidence, a full-length video, Planet of the Humans, made by environment­alists, that condemns “Renewables” for the confidence trick that they are.

Not my language but the message is right. I can recommend an excellent review that adds the nuclear message that is excluded.

A recent posting on social media that all ages may appreciate sums it up:

#BirdsPreferNuclear No woodland destruction, no pollution, no flailing turbines, no meadows hidden by panels, no artificial reservoirs, no noise. After #COVID19 and #fossilfuels humans prefer it too. It is scientific common sense.

EDF is reported to be ready to apply for planning permission for Sizewell C, click here to find out more.

Moltex reports signing an agreement with Canadian Nuclear Laboratories today to progress fuel development with funding from CNL’s CNRI program. And they are recruiting staff now, they report.

Making way for Nuclear Energy in a future of change

For the past 70 years we have enjoyed almost uninterrupted improvement in the conditions for life. However, a belief in continuous progress is unrealistic, and sooner or later our resilience was bound to be tested. We did not know where that test would come from or when. An infectious virus was always a candidate, but so was an environmental event brought on by climate change – and it still is.

For the past 12,000 years we have enjoyed an unusually stable climate and sea level. Now that is about to change. This change was probably triggered by man-made emissions, but we deceive ourselves if we think we can stop it now. We should concentrate on preparing for it, better than we did for the latest coronavirus. Those preparations should cover water and energy, in particular, without which our survival is threatened.

But our survival was never threatened by nuclear radiation, though the forces of international politics tried to persuade us that it was. Unlike a virus or fire, radioactivity is not infectious and cannot spread and multiply (without neutrons). The world still does not understand this and prefers the phobia that was encouraged half a century ago.

It is beginning to dawn on people that “renewables” are not up to the job of maintaining our energy production. A new book “Shorting the Grid” by Meredith Angwin will be out soon. She writes “a reliable electric grid is essential for anything we do, including fighting a pandemic” and quotes Peggy Noonan of the Wall Street Journal who, while sick with COVID, wrote these words:

What negative and infinite numbers mean in the real world

Like a message from the bank advising of an overdraft, negative money wakens even those half asleep. On April 5 excessive solar supply drove German wholesale electricity prices negative for five hours reaching minus 50 euro per MWh, as shown. In the process much of Europe was being paid to use energy. (As widely reported a few days later the oil industry, too, discovered the pain of negative prices.) Such uncontrolled use of renewables can swing into reverse, too. In winter in an anti-cyclone renewables produce no energy. The physics of energy does not accept “overdrafts” and without supplies from a thoughtful (nuclear) neighbour, the price would go towards infinity – that means a blackout. 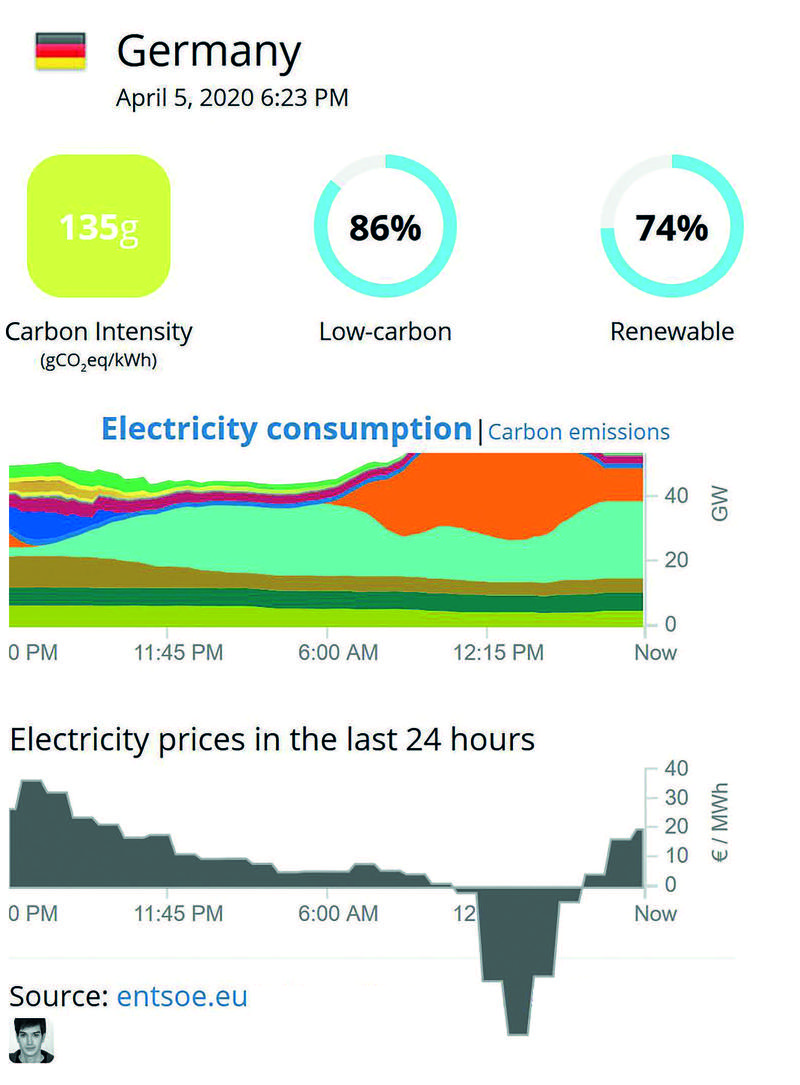 Money was instrumental in attacking “renewables” in the Courts too, this month. Some time ago MZ Jacobson published a significant paper maintaining that the United States could be supplied with electricity from “renewable” sources alone. This was challenged in the literature by a detailed study by C Clack and others at Stanford. Jacobson then sued Clack for millions of dollars in court! Eventually Jacobson was forced to withdraw and now, this month, has had all costs awarded against him. Moral: don’t try to use the power of the law to attack science. You will fail and it will be expensive.