The cacophony that currently fills the news columns obstructs rational communication. The noise is almost exclusively on the subject of COVID-19 and health, of course. It makes spreading sensible discussion on the need for nuclear energy that much harder. Improving the ratio of signal to noise, requires getting the message signal right but understanding how the noise is received, too.

The shaky relation between science and politics seems to be suffering badly again not only in the UK, but worldwide. Everywhere those who are not versed in science easily loose confidence. What happened in the Fukushima accident was misunderstood in a similar way. Neither the public nor the authorities had enough scientific understanding to appreciate what had happened. Consequently, fear was rife and trust in science and in the authorities imploded – and remains broken now, nine years after the accident.

In the current virus crisis, while politicians and news media concentrate on local failures and the search for who is to blame, the evidence suggests that problems are evenly spread around the world, as one might expect for a virus that respects no boundary. Only simple distancing seems to have made a difference.

But, like the spread of the virus, science has no boundaries, and on the research front scientists cooperate internationally, in spite of the preferences of their politicians. Fortunately, this is what they do on all subjects in the light of the evidence – always ready to change their minds as individuals in the face of clear evidence.

However, the same cannot be said of most committees and authorities. They have a mission and a purpose that is firmly laid down and says what the committee is for. An individual may resign from a committee, but seldom can he or she change its remit. By analogy with Newton’s First Law of Motion, committees cannot, and do not, deviate from straight lines – in the way that individuals can.

At a meeting held by the Health Physics Society and the American Physics Society in Pasco, Washington, in September 2018, some 200 professionals from across the world and from a wide range of disciplines and experience met for three days to chew over the risks of low to medium exposures to ionising radiation. Independent individuals and leaders of established committees were there to discuss the biological, medical and social evidence in some detail. There is no shadow of doubt that the evidence confirms that low and moderate exposures to radiation are harmless to life, especially if received over a period of time. Indeed at the right level, exposures stimulate the immune system on which life depends, and are therefore beneficial through reducing risks to other diseases. Work is in hand today to study whether such stimulation can improve the outcome of infection by COVID-19.

The Chairman of International Commission for Radiological Protection was one of those at the meeting in 2018. The Commission is one of a number of bodies that report, directly or indirectly, to the United Nations. They protest that they do not tell national authorities what to do. “We only offer recommendations”, they say – but then everybody falls into line. Anyway, the Chairman of the ICRP has a job, and that does not include rocking the boat. If it were agreed that much of radiological protection is superfluous, he would lose his job – there would not be much to do. If he resigned, he would be replaced and the Commission would continue. Anyway, on the occasion in question he was unable to support the conclusion that was clear to the vast majority of scientists present. So today, the United Nations continues to be protected from radiation – as it requires – and nuclear energy is denied to most in the world who need it, because the regulations make it two to three times more expensive than necessary.

Meanwhile, individuals and small businesses strive to overcome technical and funding problems that come with national boundaries. The message (image), posted recently by Moltex, speaks to their work with North American interests, both in academia and other nuclear concerns. We can only hope that such collaborative efforts by individuals and small teams working together are successful, both in the search for a vaccine for the virus and in the early realisation of a prototype molten salt reactor. 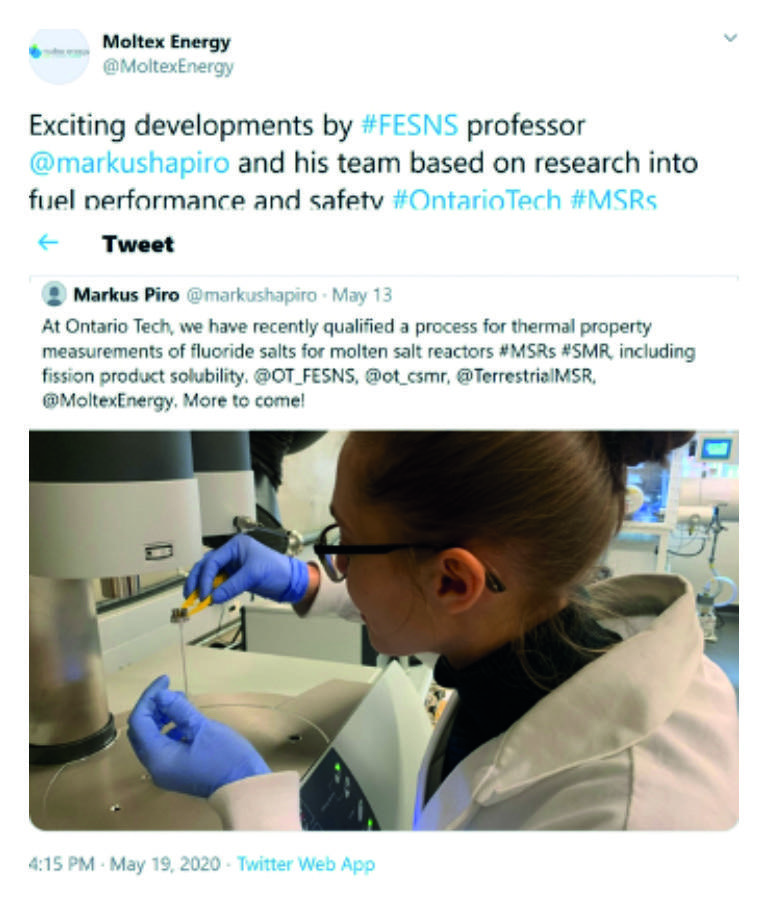 When the pandemic furore calms down we will be faced with many conflicting pressures:

In future new public fears will displace old ones, but leadership that spreads confidence based on science will be required.

Where is that going to come from? It will not start from a committee view or a sudden popular rally, but from the inspiration of a few individuals. The past provides robust examples of people who gave fear no quarter. We need to encourage today’s youth to find their successors and to follow them.

And what should members of SONE do?

Please spread the nuclear message yourselves. Alternatively invite me or another to come and speak. To a club, society or school, I will come! A week’s notice is fine. Let’s get on with telling the children, and anyone else with 40 minutes of patience to invest in thinking about science and the future! It’s not difficult.

Books available on request, £20, for the pair.

We have heard that Simon Rippon has recently passed away. Members will remember that for many years he published the SONE “Nuclear News” and was a keen supporter.