Recently by the same author:

Posted by Wade Allison on 6 October 2021

How to get the nuclear message through to people

That’s the kind of question that keeps politicians and business people busy. University lecturers have little experience of this – their audience is preselected to be receptive. School teachers meet such problems all the time. However, the best one can do is try and see what works.

What is successful on social media, for instance? Here are some examples that did better than most. Posted on Twitter on 5 April the following produced 83,800 “impressions”, though probably little is now left in the minds of those that saw it:

Wind and solar, I do not understand how these huge "farms" can possibly be considered positive for the environment and our fellow creatures! "farm"? use of the word is an outrageous abuse of language and manipulation of public opinion. "Birds prefer nuclear", I say.

An attempt to tell a little story may leave more of a mark, though this one earned only 1,800 impressions:

Greenpeace like Greenland is not green at all. Erik the Red named Greenland to persuade people to "like" it - Trump was willing! But who could describe Greenpeace as "green" with their support of environmental damage by wind/solar "farms" and objection to nuclear - really green!

Occasionally an attempt to make a significant point pays off, like the following:

This earned 7,500 impressions. When reposted on LinkedIn, it was “liked” by a number of people, respected international authorities in the economic/nuclear field.

Usually however, the restricted format and the public’s modest attention span make it challenging to complete saying anything substantial. Otherwise, it’s back to the traditional format of articles, lectures and the like. We should try all avenues!

The word from Bill Gates

Wind, solar, geothermal, hydro, wave energy…. Renewable sources are a crucial pillar of any plan to decarbonize the world’s energy generation industries and eliminate fossil fuel use. But for many reasons – intermittency, location dependency, land requirements, and others – they cannot do it alone.

To fully remove greenhouse gases from the world’s energy sectors, there needs to be a cheap, scalable form of zero-emissions energy that can reliably produce power 24/7/365. All the better if it can rapidly ramp its output up and down to help the power grid cope with load spikes and interruptions in renewable energy supplies.

The best candidate to fill this role right now is advanced nuclear power.

While nobody wants their back yard to become synonymous with Chernobyl or Fukushima, nuclear is demonstrably one of the safest forms of energy generation. Where coal and oil-derived energy have caused 24.6 and 18.4 fatalities per terawatt of energy supplied, nuclear power has caused just 0.07 – and that includes the high-profile disasters that have led to its sullied reputation.

Their ‘Natrium’ Reactor will use liquid sodium as its coolant and will feed heat into thermal storage and steam generation for electricity generation via steam turbines.

The molten salt thermal energy storage attached to the Natrium reactor will hold ten times as much on-demand energy as the largest grid-scale battery projects under development. A full scale trial plant will be up and running in the late 2020s.

The sodium fast reactor: is designed to run 24x7 at its maximum 345 MWe capacity. In terms of safety: The control rods will drop by themselves due to gravity in the event of a power outage, and the natural circulation of the air will function as emergency cooling. Operating at atmospheric pressure, it will not need a containment shield like pressurised light water reactors (PWRs) do. The reactor will be underground, boosting the safety factor while cutting down costs.

The Wind-jammers – a fanciful story for our time

Wind-jammers – wind turbines that wait for the wind, becalmed like sailing vessels of old.

By the end of 19th C steamships ruled and, in the words of Rudder Magazine [1892], deck hands on the liners contemptuously refer to sailing vessels as wind-jammers. Why the name? Perhaps, because wind energy, like jam, may not be available today, only tomorrow – or vice versa. In the case of jam, that was absolutely clear to the White Queen as she explained to Alice in Through the Looking Glass [Lewis Carroll, 1871].

So in the nuclear age wind-jammer is again a relevant name, this time for a wind turbine as it waits for the wind, despite the impatience of frustrated energy consumers eager for the benefit of the utility that they have been told is free. 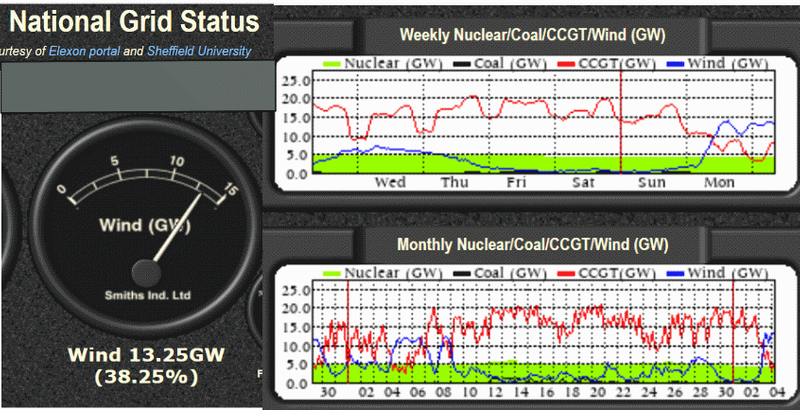 But look at the data for today, Tuesday 4 May 2021 – there is lots of wind! It’s supplying 38% of the energy for the UK National Grid. Excellent!

But the weekly and monthly plots above show how much it can change for the worse – the blue line is the wind, the red is electricity generated from gas, and green is nuclear. The upper plot shows wind has only been strong since Monday morning, but for all of Friday, Saturday, Sunday, there was no wind at all – wind-jammers living up to their name. Is this unusual? Not at all. The lower plot shows there was negligible wind for a week from April 12th to 20th, and again from 22nd to 23rd. Wind-jammers idle.

Noticing there is no wind is not a sophisticated or hi-tech measurement. It’s simple, like seeing that the Emperor in Hans Andersen’s children’s story had no clothes. It is equally easy to follow the argument – no wind means no energy and no electricity. Price? That’s irrelevant if there is no energy to be had. With no natural gas after 2050, that is a bleak outlook.

This is the “NetZero” future to which all governments eagerly sign up. Without electricity modern life stops, and without gas to provide the extra energy, electricity blackouts will be several times a week, if not every day.

More wind-jammers in the North Sea add nothing, whatever Boris Johnson says. Energy storage on the scale required for UK is equivalent to a thousand bombs, each the size of the Beirut explosion in 2020. The development of such mega-batteries is both unrealistic and dangerous. See Big batteries - an explosive issue. Grids offering energy transmission over long distances is expensive and vulnerable – and neighbours usually have similar problems, as in Texas in 2020.

The solution is in plain sight for all to see in the two plots above. The green band, the contribution of nuclear power, contributes 24/7. The answer is to have much more of it, full on all of the time – and then the electric cars, hydrogen, water desalination, and more can follow. So what we need is the immediate development of nuclear power worldwide, and no more investment in wind-jammers at all.

Shipping company X-Press Feeders – the largest independent common carrier in the world – has announced it is investing in Core Power (UK) Ltd as part of its efforts to reach International Maritime Organisation targets for reducing CO2 emissions by 40% by 2030 and 70% by 2050. Core Power is developing a modular molten salt reactor for marine propulsion. Separately, Core Power yesterday announced it has become a member of the World Nuclear Transport Institute.