“Boris Johnson is close to giving Sizewell nuclear power plant in Suffolk the go-ahead” we were told on November 5th. Sizewell C will provide 3.2 GW of electricity for 60 to 80 years – and 5.8 GW of waste heat in addition.

France has been decarbonised for decades and generates some 58 GW of electricity from nuclear. Much is exported. It makes little use of gas or renewables except hydro. So Hinkley C and Sizewell C should reduce UK imports and be a small step towards catching up with where France already was decades ago. Unfortunately, Boris Johnson has a well earned reputation for indecision. Will he do it?

And more – the Rolls Royce Consortium 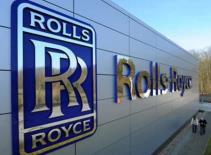 From the NeutronBytes column of Dan Yurman we learn “Rolls-Royce Enlists Exelon to Help Deploy 16 440MW PW” Rolls-Royce and Exelon Generation have signed a Memorandum of Understanding (MOU) to pursue the potential for Exelon Generation to operate compact nuclear power stations both in the UK and internationally. Exelon Generation will be using their operational experience to assist Rolls Royce in the development and deployment of the UKSMR.

The firm says that once it has orders for at least five of them, it can deliver each unit for about $2.2 billion. It has plans to build a fleet of them at existing nuclear power stations in the UK starting in the early 2030s. This sounds very positive indeed. But it raises the same question: will the UK Government back this development?

News media reports in the UK said global engineering and construction giant Bechtel will lead the consortium as EPC and will be joined by utility Southern and nuclear technology provider Westinghouse, which designed and manufactures the AP1000 reactor technology. The Westinghouse AP1000 has completed the UK GDR regulatory process and is approved from a safety perspective to be built in the UK.

And where does the UK Government stand on this one?

A welcome announcement on 2 November 2020 read:

The team has submitted its application to the US Dept. of Energy to take part in cost-share risk reduction awards under the Advanced Reactor Demonstration Programme to build a prototype MSR, as a proof-of-concept for a medium-scale commercial-grade reactor.

“The implications of the MSR for transport and industry could be transformational, as we seek to build scale-appropriate technology and broad acceptance of modern and durable liquid-fuelled atomic power to shape the future of how we deal with climate change”, Bøe concludes.

Over the next few decades as many as 60,000 ships must transition from combustion of fossil fuels to zero-emission propulsion. The UN’s maritime agency IMO has mandated with unanimous approval from 197 countries that shipping must reduce emissions by 50% of the 2008 total, before 2050. This means an actual emission reduction of almost 90%, by 2050. MSR technology being developed by the consortium could achieve that goal, by powering production of green sustainable fuels for smaller ships and providing onboard electric power for large ships, with zero emissions as standard.

London based CORE POWER is working with the world’s leading Advanced Reactor Developers to meet pent-up demand for disruptive energy technology in ocean transportation and beyond. The MSR can be the technology that forms the start of a ‘second atomic era’, where climate change is the main driver of powerful, inexpensive, and safe new energy solutions. The MSR has an economic potential which could be greater than that of oil and gas, providing the sustainable, clean energy the industry needs to move deep into the future without polluting the environment.

The bad news about off-shore wind

The Government, ever more anxious to please the public appetite for renewables than to invest in reliable electricity, intends to approve 40 GW of off-shore wind energy by 2030. This is not being straight with consumers. This capacity will only be available 32% of the time – at the whim of the weather, not when it is needed. Without fossil fuel or nuclear back-up generation, that means blackouts, frequent and prolonged. The alternative is to have expensive plant standing idle and waiting for the wind to drop.

Before the UK Government continues with this ill-advised policy, it should ask whether any other country has already done so. The answer is that Germany and Denmark have alreadt invested billions of euros and yet have the most expensive electricity in Europe, yet without reducing carbon emissions.

The fossil fuel industry is happy when immediate need reduces the attention given to climate change. In fact Germany is opening new coal fired power stations and arranging connection to increasing supplies of Russian gas via the NordStream2 pipeline. Indeed the oil and gas industries openly support renewables. Their advertising of renewables is very effective in promoting carbon emissions with a “green” label.

The UK Government – and everyone else in the UK – should consider the following real live story about electricity supply, taken just last week in fact.

On November 3 the Financial Times reported that an anti-cyclone was forecast that would necessarily reduce wind speeds substantially, both on-shore and off-shore. The UK National Grid expressed concern about the potential instability of electrical power supplies for the following few days.

“National Grid has warned for the second time in three weeks that supplies of electricity in Britain are going to be stretched as fewer-than-expected power generators will be available at peak times, while it is also forecasting low output from renewable sources such as wind. The company issued a notice to the market late on Tuesday asking for more capacity to be made available the following day to increase the buffer between supply and demand, although it insisted there would still be enough generation to meet demand”. The group, which is in charge of Britain’s electricity system, had earlier issued a tweet warning that it was forecasting tight margins on Wednesday “owing to a number of factors including low renewable output and the availability of generators over periods of the day with higher demand”.

The buffer to which they referred included bringing some coal-fired stations on stream and also the single stage gas fired plants (OCGT) which are less efficient but more flexible than the standard combined cycle gas ones (CCGT). These and other measures increase the cost of electricity to those whose supply is maintained. The response of the National Grid to this challenge of balancing supply and demand can be seen on line on various sites. The connection of the extra sources is the first indication of trouble. A “near miss” is seen as a rapidly increasing price, as a result of which some users are persuaded to switch off. The stability of the supply fails for all users when this financial incentive cannot buy the missing electrical power.

What happened on Thursday 5th November at around 18.00 hours illustrated such a “near miss”. The story is shown on the dials below and the charts further down this page.

The wind had dropped, the sun had set, it was cold and demand in GB soared to 43 GW (left hand large dial). Imports from France, Netherlands, Belgium were hard over at 4 GW (lower small dials). Gas (CCGT) and nuclear (middle two large dials) were providing most of the supply (67.7%). Wind was generating 2.1 GW, despite its advertised 23 GW rating. Biofuels, alias US woodchips, were providing another 2 GW. The upper row of small dials shows hydro and pumped storage were near full-scale at 5.9 GW combined. The emergency coal and gas (OCGT) were full-scale at 3.1 GW.

Evidently there was no spare capacity. Renewables, solar and the wind, supplied just 5% of the demand. Without gas and nuclear the grid would have failed most of the time in fact. The same story was evident on the ElectricityMap website, shown below. 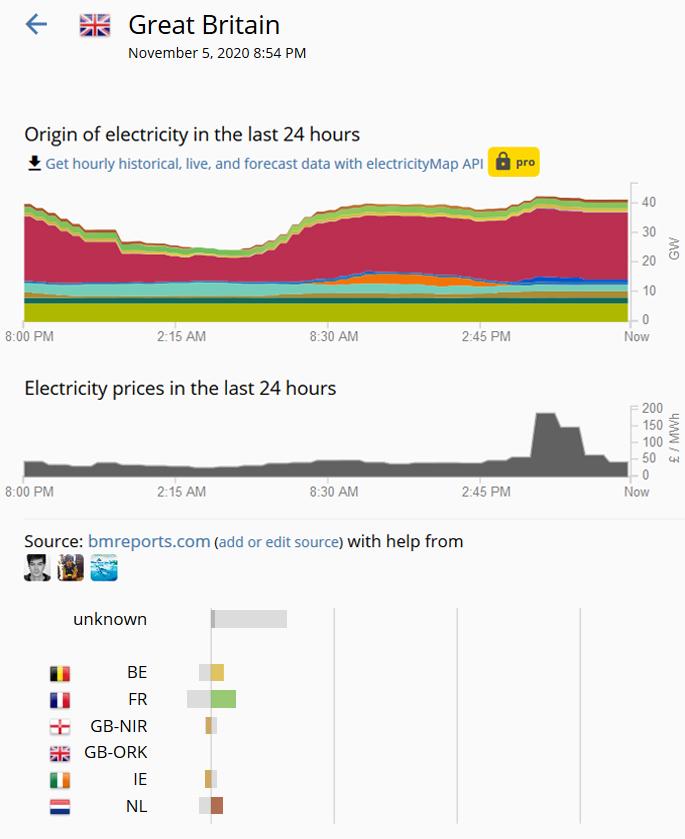 The only option was to raise the price to persuade some commercial users to switchoff. The coloured chart shows the energy contribution of the different sources over 24 hours up to 20.00 hrs on 5th November. The small peak at 18.00 in the total demand, driven presumably by the mealtime domestic load, shows when some industrial consumers had to switch off – or be switched off. The grey chart shows the price on the same timescale. It rose precipitately from £25 to £30 per MWh all the way up to about £170 per MWh. That shows the near miss. If this price rise had not been sufficient to persuade enough users to disconnect, there would have been a break in supply for all.

If society wants renewables and electric vehicles, this example shows how matching supply and demand will become impossible if the use of gas is excluded. An extra 40 GW of off-shore wind contributing only 10% on a day like 5th November would be quite ineffective. We conclude that if supplies are to be reliable enough new nuclear power will be needed in the 2040s to satisfy most of the demand. France already has about 58 GW. If we are to have electric cars and a hydrogen economy, we are going to need at least 60 GW of new nuclear.

We were not be able to hold the AGM in person at the Institute of Civil Engineers as we had hoped. Nevertheless, the Meeting went ahead on 26 October, but in two parts, both online and open to Members. The first part at 2.00 pm was the formal closed business meeting. Minutes will be sent separately to SONE Members.

The second part was a joint session with UK Nuclear Industries Association YGN (Young Generation Network). It was recorded for public viewing and is available below. Instead of the lecture by a single distinguished invited speaker, as normally given at the SONE AGM, we invited five panellists to discuss the subject “Only Nuclear Can Provide the Energy that the World Needs” from their own personal standpoint.

Anyone who has not watched how the views of this highly diverse group came together is strongly recommended to do so. It was very uplifting. The objective for COP26 in Glasgow in November 2021 should be to get the place of nuclear in our future firmly established worldwide.