We will not be able to hold the AGM in person at the Institute of Civil Engineers as we had hoped. Nevertheless, the Meeting will go ahead on 26 October at 2pm, but in a different form. It will be in two parts, both online and open to Members. The second will be open to members of YGN and also recorded for public posting.

The first part at 2.00 pm will be the formal closed business meeting. The Agenda paper explains how Members can join by computer or by ordinary phone.

The second part at 3.00 pm will be a joint session with UK YGN (Young Generation Network). It will be a panel discussion, accessible by the public and chaired by Neville Chamberlain. Below is the Press Release which also gives the link, either to watch at the time or to view afterwards.

The event is organised by the Supporters Of Nuclear Energy, SONE, a self-funded independent group of individuals of many different disciplines, interests and backgrounds, who argue the scientific and environmental case for new nuclear power plants designed to deliver affordable, reliable and low-carbon electricity to the UK consumer.

The panel will consider the case that the UK Government should commit itself to building more nuclear as the only reliable way to meet its net-zero objectives and that the UK should press the scientific case worldwide at COP26 in Glasgow in November 2021.

Other panellists include Arun Khuttan, a young nuclear scientist leading activities in the run up to COP26 on behalf of the Nuclear Institute’s YGN, Tim Stone CBE, Chairman of the Nuclear Industry Association, and André Wakker, an independent organisation consultant from the Netherlands, with experience in the nuclear, oil and renewables industries. He has been renewable energy policy advisor to the Dutch government.

“We are lucky that we have a reliable clean energy option that we can build right now to wean ourselves off polluting fossil fuels. People are afraid of nuclear, when really they should be afraid of what will happen to our planet if we don’t start to bring down emissions soon.” Zion Lights

“The world has inherited a fear of nuclear radiation, though it is the fear that is dangerous, not the radiation. In an attempt to reduce fear, nuclear power stations have become over-designed and over-regulated – and expensive. But our children have no reason to accept that.” Wade Allison

Following their initial contributions and discussion the Chairman will invite the panel to answer questions. SONE members are invited to contribute these by email in the week before by email to sec@sone.org.uk.

SONE thanks YGN for agreeing to manage the technical presentation of the panel discussion and the recording.

Much has happened since the previous Newsletter in August. Keeping up with developments, taking a short holiday and making arrangements for the AGM, prevented me getting out a Letter in September. My apologies.

To anyone without any understanding of science, life and its choices must seem very confusing. Indeed, was that not always a personal reason to follow science? For many, apparently not. Having at last realised that the climate is changing, and that this has been triggered by the combustion of fossil fuels, they are reassured that net carbon emissions are to be outlawed at a future date. Slowly they will appreciate that such legislation by itself is powerless in the face of natural science, as King Canute explained to his nobles on the seashore a thousand years ago. For instance, putting large-scale carbon capture at the top of an international wish list will not make it happen.

Nevertheless, the stock markets have now begun to understand that oil and gas will have to remain in the ground. The recent promise by BP of “net zero by 2050” implies “zero BP” by 2050. Its market valuation along with that of other oil interests has fallen accordingly.

However, markets have still not got the whole message. Ill fated investment in “Renewables” continues apace and the unique solution offered by nuclear power is ignored. Not only are nuclear plants being wilfully shut down in Germany, USA and even France, but carefully planned investment in UK nuclear power is in jeopardy. Somewhere between the pandemic, the price of gas and over-enthusiasm for “Renewables”, Anglesey may lose the case for its nuclear newbuild.

On 16th September Hitachi announced it will end its business operations on the Wylfa Newydd nuclear power plant construction project, which it had suspended in January 2019 “because it was clear that further time was needed to decide on a financing structure”. Horizon Nuclear Power, the UK project developer that Hitachi acquired in November 2012, said it will now take steps for the “orderly closing down” of all its current development activities, but will “keep the lines of communication open” with government and other key stakeholders regarding future options at both its sites, which in addition to Wylfa Newydd on Anglesey, include Oldbury on Severn in South Gloucestershire. Hitachi said it had made the decision to exit the project given that 20 months had passed since the suspension, and the investment environment had become “increasingly severe” owing to the impact of COVID-19.

But don’t close your mind to GE-Hitachi. They have very advanced ambitions for their SMR BWRX-300. This was highly ranked by the Fermi Energia study in Estonia where they have now launched a feasibility study into building an early SMR.

World Nuclear reports “A decision on planning consent for the Wylfa Newydd nuclear power plant project on Anglesey that was due to be made yesterday has been delayed until 31 December, as requested by Horizon Nuclear Power, the UK project developer owned by Japan’s Hitachi. Horizon was to develop two UK Advanced Boiling Water Reactor units at the site in North-West Wales, with the intention to contribute to the energy policy of the UK government, as well as maintaining the business foundation that supports the nuclear industry in Japan”. So the story is not over yet!

Likewise Poland is facing up to the twin threats of the current reliance on domestic coal and the alternative of becoming dependent on Russian gas. Wisely, they are planning to reduce both by building new nuclear plants. Find out more.

A combination of political parties in the Netherlands has read the scientific message too and is launching a public consultation. Find out more.

Politics in Germany remains blind to the messages of natural science. Obsessed by the Green dogma that all nuclear plants should be closed, hemmed in by the requirement to discontinue the use of coal, open to undue Russian influence through the Nord Stream2 gas pipeline project, embarrassed by the politics of Belarus and aware of the total failure of Energiewende to supply competitive electricity to German consumers, Germany is stuck. In their world they see nowhere to go. They have only themselves to blame.

Meanwhile Dutch social media engages German opinion as the following snippet shows:
@MinPres @markrutte plans to redeploy #NuclearEnergy for reducing CO2-emissions. When will you & @Die_Gruenen become so smart to admit that decommissioning #nuclear power plants is a No-Go at the time of #ClimateEmergency? Find out more.

Time spent on social media on the subject of energy can be revealing. Discussion on the Facebook site “Atomic Advocates UK”, which meets by Zoom on alternate Mondays, attracts foreign participants, from the USA, in particular. We may think that the domestic UK situation is a mess, but many in the outside world are looking to the UK for leadership! And we should rise to the occasion, especially since the next UN climate change conference is in Glasgow in November 2021 and the IPCC has yet to be convinced that nuclear power is the principal solution.

The translation option of Facebook makes it simple to engage energy discussions elsewhere. I have been contributing to a Danish site. It is remarkable that correspondents there see the Renewables regime as imposed on them by EU. There is a busy pro-nuclear site, Atomkraft – ja tak! with strong support and a readiness to demonstrate. They see what is happening in Poland, Netherlands, Sweden and UK, and encouraging them is productive.

Fun with a strip

We need to reach many shades of opinion and it helps to play games in a lighter vein. Marie Zabell, member of SONE and a leader with Zion Lights in @mums4nuclearUK, drew the cartoon below. Marie worked with the Joan Pye Foundation in Newbury. We have more cartoons that she has drawn and we are posting these on social media to broaden the attention that the nuclear message attracts. 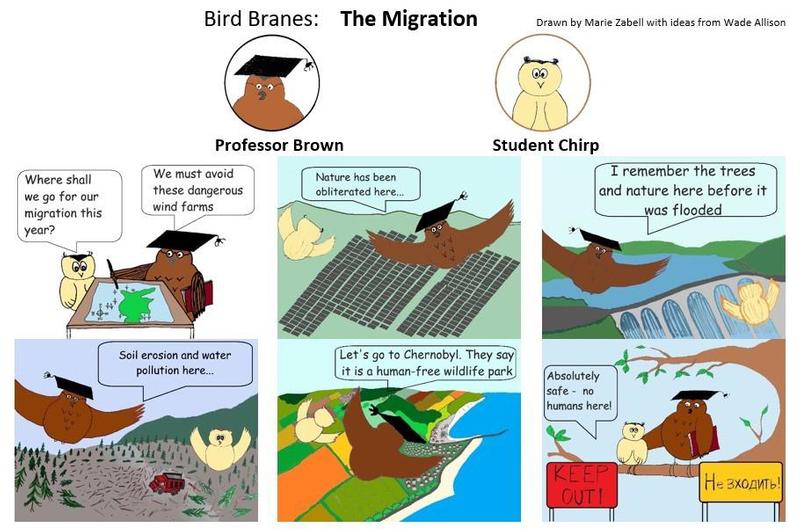 The UK government has launched a COP26 Energy Transition Council to bring together leaders of the global power sector, to accelerate the transition from coal to clean power. Announcing the initiative at a Clean Energy Ministerial side event, Martin Callanan said this new partnership would “speed progress” for the next round of UN climate talks, in November 2020. Callanan, a life peer, delivered a keynote speech on behalf of COP President Designate Alok Sharma, at the CEM11 discussion Passing the Tipping Point: the next decade of clean energy cooperation held on 21 September. The COP26 Energy Transition Council reflects the advice of the International Energy Agency, that to meet the goals of the Paris Agreement, the global transition to clean power needs to move four times faster than its current pace, Callanan said. Damilola Ogunbiyi, the UN secretary general’s special representative for sustainable energy, will join Sharma as co-chair of the Council.